A very big welcome to the Forum glad that you found us.As the name say this Forum is dedicated to the QE2 in here you will find lots of information and filled with photos that cover all her years at sea.

We ask you please take your time and have a good look around for sure there is a question somewhere that you might have answer.This topic is open to guests too if you think you have some information to add please do so.

But please remember the main subject here is QE2 related.

We think that once you have looked around you are going to want to be part of this big family.

Their is of course some threads that are open only to members.

Please register yourself its easy and free.

The QE2 The Legend Team

Queen Elizabeth 2-The Legend
***1st December 2013 QE2 is moored at Berth 8,since 316 days she has been at the Dry Docks,her departure from here is still unclear.***
Log in
Who is online?
In total there are 4 users online :: 0 Registered, 0 Hidden and 4 Guests

» QE2 and the Falklands War

She was on Trans Atlantic Voyage Number 1014, Westbound from Southampton and Cherbourg to New York City. The vessel disembarked on September 7 set to arrive in New York on September 12.

On night of the 10th to 11th September 1995 the ship was slammed by a 95 foot high wave, followed by two smaller waves. The captain, Captain Warwick, reported winds to 130 miles per hour with average wave heights of 40 feet.
The 95 foot wave hit as most passengers were asleep in their beds, those who could sleep being tossed all night, at 0410 hours (4:10am)
The captain had changed course to avoid the hurricane, but the storm had created high seas, with huge swells over a wide area. Even though the swells were high, the captain and crew on the bridge say they were not hit by a swell, but instead a rogue wave.
The captain said, "At 0410 the rogue wave was sighted right ahead, looming out of the darkness from 220°, it looked as though the ship was heading straight for the white cliffs of Dover. The wave seemed to take ages to arrive but it was probably less than a minute before it broke with tremendous force over the bow. An incredible shudder went through the ship, followed a few minutes later by two smaller shudders. There seemed to be two waves in succession as the ship fell into the 'hole' behind the first one. The second wave of 28-29 m (period 13 seconds), whilst breaking, crashed over the foredeck, carrying away the forward whistle mast." 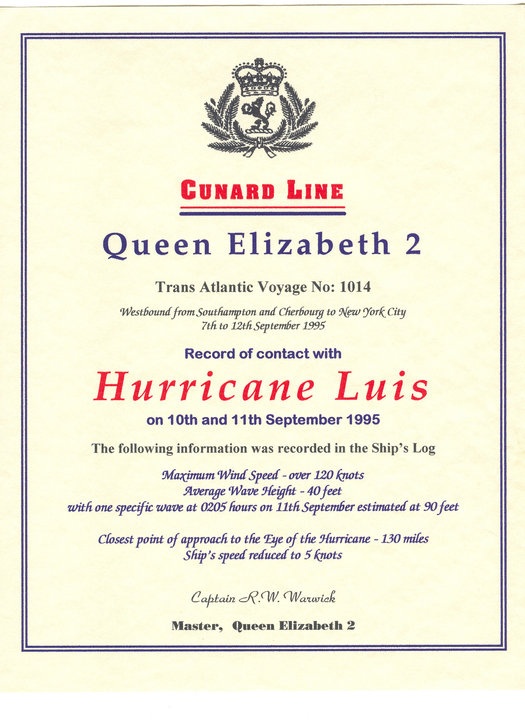 Damage to the bow 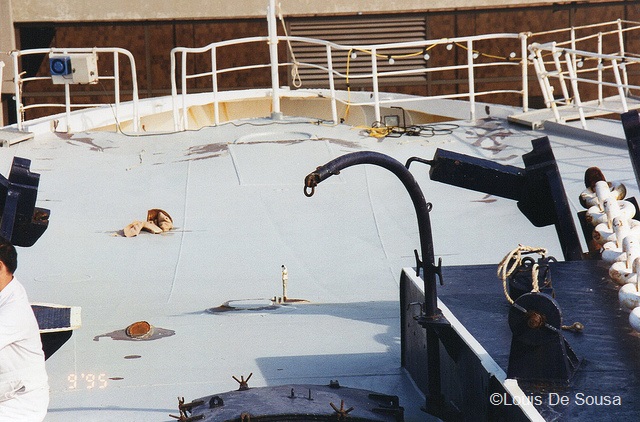 Thanks for the picture, you can see how much it "bent" her.