A very big welcome to the Forum glad that you found us.As the name say this Forum is dedicated to the QE2 in here you will find lots of information and filled with photos that cover all her years at sea.

We ask you please take your time and have a good look around for sure there is a question somewhere that you might have answer.This topic is open to guests too if you think you have some information to add please do so.

But please remember the main subject here is QE2 related.

We think that once you have looked around you are going to want to be part of this big family.

Their is of course some threads that are open only to members.

Please register yourself its easy and free.

The QE2 The Legend Team

Queen Elizabeth 2-The Legend
***1st December 2013 QE2 is moored at Berth 8,since 316 days she has been at the Dry Docks,her departure from here is still unclear.***
Log in
Who is online?
In total there are 5 users online :: 0 Registered, 0 Hidden and 5 Guests

» QE2 and the Falklands War

At the end of April 1982, QE2 was returning to her homeport of Southampton,
England after making her maiden call at Philadelphia. The ship's company was aware
that a number of British-flag ships, including the popular P&O cruise ship
CANBERRA, had been "taken up from trade" by the British government but no one
seriously expected QE2 to be requisitioned. The ship was the largest and fastest
passenger ship in service and the only one still making regularly scheduled transatlantic
crossings. She had been constructed during the late 1960s incorporating innovative
designs and cutting-edge technology. She cost nearly 30 million pounds and was by
far the most famous ship in the world. Still, to pass the time, some of the younger
officers studied charts for the South Atlantic and made hypothetical course calculations.
Meanwhile, at a meeting at the Prime Minister's country residence, Mrs. Thatcher
was advised that QE2 was required to transport the next wave of troops. "I asked
whether it was really necessary or advisable to use this great ship and put so many
people in it, but as soon as I was told that it was necessary to get them there in time I
gave my agreement."
As QE2 neared England, she began to pick up commercial radio broadcasts that
said that QE2 had been requisitioned. After confirming these reports with Cunard's
shoreside offices, the captain made a public announcement that the ship would be
leaving service following passenger disembarkation the next day. Approximately,
1,000 officers and crew members volunteered to accompany QE2 into the war zone.
Out of these, 650 were selected including 33 women.
After disembarking the passengers, work began to transform QE2. Art work,
silver, furniture, and casino equipment was taken ashore for storage. Wooden panels
were laid down to protect the carpets from the soldiers boots. Hundreds of cots were
brought aboard. Although the troops would not be packed in like they were during
World War II on the QUEEN MARY, which carried as many as 16,000 soldiers, the
plan was to take 3,000 soldiers on QE2 - - roughly 1,000 more people than her
maximum peacetime passenger capacity. In addition, military communications
equipment was brought onboard and a secure communications center was
constructed. Tons of military stores and cargo were brought on including vehicles, jet
fuel and ammunition. Since there was more than would fit in the hold, some supplies,
including ammunition, were stored on the open deck near the funnel.
The most significant alteration came about because the military wanted to use
QE2 not just as a troopship but as a helicopter carrier as well. Since the ship is 963
feet long and has plenty of open deck space, this did not seem to be much of a
problem at first blush. However, one of the innovative techniques used in QE2's
construction was the bonding of an aluminum superstructure onto a steel hull. This
hybrid construction gave QE2 a strong hull that could withstand the rigors of the
Atlantic as well as a light weight superstructure that would save fuel and lessen the
ship's draft so as to allow her to enter more cruise ports. But, while the aluminum
superstructure is strong enough to support the occasional small private helicopters that
corporate executives and film stars land near the funnel on Sun Deck, it would not be
strong enough to support the stresses and loads associated with military helicopters.
The solution was to build two heliports. The smaller one would be built forward
of the superstructure on a platform extending over the capstans. The second platform
would be built aft resting on a series of girders that would be anchored in the structures
that support the weight of the ship's two outdoor swimming pools. However, since
QE2's open decks aft were built in a series of terraces, part of the superstructure had
to be cut away in order to create an expanse large enough to meet the military's
requirements.
Once the alterations were completed, the ship embarked the troops, consisting
primarily of the Fifth Infantry Brigade, which was comprised of battalions from the
Scots Guards, the Welsh Guards, and the Queen's Own Gurka Rifles. All of these
units were elite units in Britain's all-volunteer army. The plan was that these units
would be the main British invasion force, following up on initial landings made by Royal
Marine commandos and troops from the Parachute Regiment (acting as infantry) who
were already en route south. Considering that Britain's plans were built around these
troops, it is clear that much depended upon QE2. Indeed, if QE2 had been lost, it is
difficult to see how Britain could have prevailed.

Photos from the QE2 during the conflict

Arriving back from the Falklands on 11 June 1982 approaching Southampton.

I have just been given this photograph which shows some of the Military Officers in the Queens Grill during their stay on the ship to and from the Ascension Islands. They are surrounded by the Queens Grill Waiting and Wine Steward staff who worked during the journey down with the troops. Can anyone spot any names? I know a couple of these (Jeremy Letherbarrow - steward, George Adamou - wine steward and Jonathan Norton- the hotel officer)

Thank you Steven that photo is gold.Jonathan Norton looks so young

I have to agree with Louis a photo to be cherished, thanks for posting. 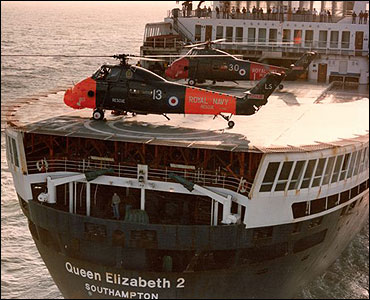